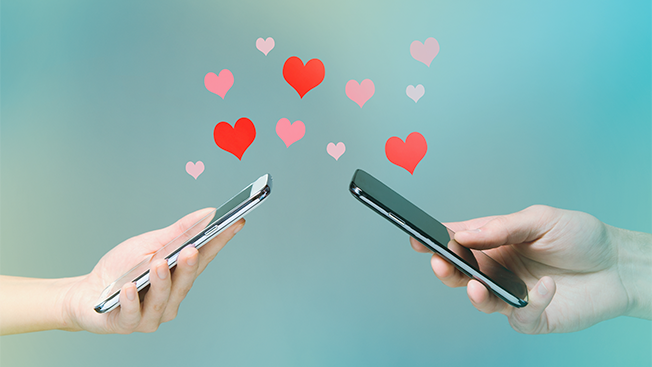 While Consumer Electronics Show attendees scope out the hottest virtual reality at the Las Vegas Convention Center this week, Tinder is promoting another kind of VR—very real. In a video released on Thursday, it seemed for a second like maybe the dating app was launching some sort of virtual reality experience. (After all, VR has been touted time and time again as an empathy machine, and what romance-seeker couldn’t use a little more of that?)

“We’re always looking for new ways to bring people together,” the narrator says quietly, as more and more of the product is revealed. “Not in feeds or comment sections. Real together. Shared experience. The feeling of being truly connected.”

The 37-second spot almost has the feel of something from an Apple keynote event, with a pitch-black background and a sleek design that’s slowly revealed as light washes over it. But then, as the camera pans out, it’s clear that it’s not a VR experience of CES proportions, but just two people staring through a tube at each other the old fashioned way.

“It seems like everyone is launching a VR headset nowadays,” according to a Tinder blog post. “As a tech company, we felt inspired to create one of our own. But here’s the thing: our mission has always been to get people together to have real experiences in the real world. So how do we reconcile the fact that VR is the antithesis of this?”

By pitching something very real, of course. It’s too soon to tell exactly how popular Tinder will be this year, but if last year’s numbers are any inkling, it’s bound to be a hit yet again. At CES 2016, Tinder was also one of the most popular apps with attendees, according to New York-based Vector Media, coming in second place as the most-used during the conference behind only Facebook Messenger.